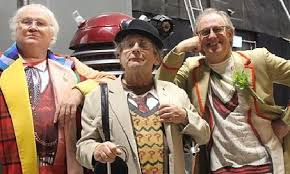 Colin Baker was speaking at the Myth Makers convention today and told the crowd that Peter Davison’s awesome The Five-sh Doctors Reboot, in which Davison, Baker and Sylvester McCoy try to get a part in Day Of The Doctor, will be released on DVD (and most likely bluray) as a part of an upcoming Matt Smith release! This is exciting news and something to look forward since the Classic Doctor Who range will be over once Underwater Menace is released later this year.